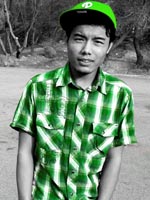 HALEN: Well, I am HALEN (some of you might know me as lyncher_, _oN_Silva_ or other names), I live in Yamaguchi, Japan and I am 18 years old.

Question: Do you still go to school?

HALEN: No, I finished school.

Question: So what are your plans for the future?

HALEN: I want to become a professional gamer. I have a sponsor who will support me if I win the upcoming World Cyber Games in Seoul, Korea. If that does not work out I will probably attend a design-school.

Question: That leads us directly to the World Cyber Games. When and where are the Japanese Preliminaries?

HALEN: The Japanese Qualifier will take place October 5th in Tokyo. It´s about 1000 km away from my town but i will go there with Shikansen, a Japanese Super-Train. You can find all info about the tournament on this website: http://www.acegamer.net/wcg2002. Would be helpful if you understand Japanese though...

Question: You are the only "known" AOK-player from your country. Why is that?

HALEN: AOK is not very big in Japan. And most players play for fun, for example 4v4 games or other maps than Arabia.

Question: Which is most popular game in Japan? StarCraft?

HALEN: No, nobody is playing StarCraft here. Most popular are Diablo, Ultima Online and Everquest. Japanese Players love RPG´s.

Question: Who is the 2nd best player in Japan at the moment? Do you know him (or her) at all?

HALEN: I don´t know because I don´t play much with Japanese players. But they can´t beat me anyways so I don´t worry so much. ;-)

Question: Ok, let´s talk about the recent tournaments (MFO´s "Alliance Cup" and Legion´s "Arbalet Cup 2"). For a long time you never went far in big tournaments but now you just won two in a row. Is HALEN better than ever or are the opponents just less good?

HALEN: In previous tournaments I was very nervous and sometimes I played like a rookie, for example in Arbalet-Cup 1. But now it´s ok.

Question: In the "Arbalet Cup 2" - Final you wasted Grunt in 2 games that lasted 21 and 24 minutes. Rumors go the games were faked. Your comment?

HALEN: What can I say? We set a time, Grunt came and we played. Maybe I was just lucky? Games between top-players are often decided by small things.

Question: You won quite some big money. How are you going to spend it?

HALEN: I don´t know yet. Maybe I put all in bank.

Question: Since you are 18 years old how about buying a car? Do you get a driving licence with 18 in Japan?

HALEN: Yes, with 18. But I dont need a car. Perhaps I will buy clothes - I love clothes.

Question: By the way, you still have that funky red hair-color?

HALEN: Haha, no. Now it´s brown. But maybe I will change it to white for the World Cyber Games. ;-)

Question: Many experts got tired of AOK and left the game but you still play almost every day.

HALEN: Yes, because I like it and because of the WCG of course. I really want to win it once in my life and for that I work hard.

Question: And after the World Cyber Games? Will you play Age of Mythology?

HALEN: I will think about that after the WCG. I had the AOM Alpha but didn´t play it because I only have time for one game at the moment. Maybe I will play it or maybe WarCraft 3. WarCraft 3 is a good game - Japanese like it a lot.

Question: Who you think will win WCG this year? After all it´s the first WCG without Koven!

Question: Ok, then tell us who will be your hardest opponents. Grunt? Chris? RD_Champ?

Question: What about the Taiwanese Players?

HALEN: I play a lot with Yanzi - he is very good.

Question: And who are - apart from this event - the best players in the world?

HALEN: Koven, RD_Champ and Grunt. I learned many things from them.

Question: You told me that your website http://www.halen.jp will close soon. Why is that?

HALEN: Because the webhoster is closing and I don´t update it anymore. It became a very famous site with now almost 1.100.000 visitors but I really didn´t want that at all. If I make a website again it will not be a game-site but just a fun-site.

Question: We enjoyed your ego-posts a lot, hehe. But you didn´t post a recorded game since a long time. All because of the World Cyber Games?

HALEN: Yes, I don´t like sharing recorded games. I show my skill in real games not in records.

Question: Does that mean we can expect a new secret strategy for the World Cyber Games from you?

Question: You are very famous in the Zone. Which are your top-rated names?

Question: That´s an impressive list indeed. Why you do you make so many names? You like to smurf?

HALEN: If I play on only one name and get to a 2200+ rating I need another name because only a few players are rated like this and want to play.

Question: I wonder why you never joined a clan in all the time.

HALEN: I joined CNS. I learned many things there - Hey, I love CNS! :-) I know clans with many members and talk are cool but there are no benefits for me - skillwise. If i join for example L_Clan i must post my recorded games so many players can steal my skills.

Question: Besides Arabia which maps do you like the most?

HALEN: Highland and Nomad. I play many team games on Nomad.

Question: Last question: What do you like to do when you are not using the computer?

HALEN: Haha, yes. Karaoke. Some time ago I went every day to Karaoke. Haha. I even had a band in Junior Highschool. We copied famous Japan Pop Bands. Haha.

Thank you for the interview!